Progress in spite of government not because of it.
Exclusive
0
image
default
white
human-freedom-is-up
60
Human Freedom Is Up, But Government Quality Is Down
By Marian L. Tupy
|
@HumanProgress

These are interesting times to be an American. The people's trust in the U.S. institutions is plummeting and the outcome of the presidential election, however it ends, is unlikely to reverse that trend. Over at Human Progress, we have a whole section of the website devoted to "good governance" indicators. As you'll see in the charts below, it is a mixed bag. People around the world appear to be growing freer, but their governments are getting less transparent and more corrupt. Could these diverging trends be the key to understanding of the people's growing dissatisfaction with their ruling elites?

Our political rights index reflects the ability of people to participate freely in the political process, including the right to vote freely for distinct alternatives in legitimate elections, compete for public office, join political parties and organizations, and elect representatives who have a decisive impact on public policies and are accountable to the electorate. On a scale from 1 (best) to 7 (worst), the world has experienced substantial improvement.

Our freedom of the press index evaluates the legal environment for the media, political pressures that influence reporting, and economic factors that affect access to news and information. Freedom of the press, which is measured on a scale from 1 (worst) to 100 (best), is at an all time high.

Our civil liberties index measures freedom of expression and belief, associational and organizational rights, rule of law, and personal autonomy without interference from the state. On a scale from 1 (best) to 7 (worst), the world has experienced considerable improvement since the early 1970s. Unfortunately, civil liberties have deteriorated somewhat since 2005.

Our data on democracy versus autocracy over time codes democratic and autocratic "patterns of authority." It measures key qualities of executive recruitment, constraints on executive authority and political competition. It also records changes in the institutionalized qualities of governing authority. Country scores can be converted into three regime categories: autocracies (-10 to -6), anocracies or partial democracies (-5 to +5) and democracies (+6 to +10). Today, the average country scores a "4" and is considered a partial-democracy.

The corruption perceptions index scores countries on how corrupt their public sectors are seen to be, and captures the informed views of analysts, businesspeople and experts in countries around the world. Once again, corruption, which is measured on a scale from 0 (worst) to 100 (best) around the world, seems to be worsening. 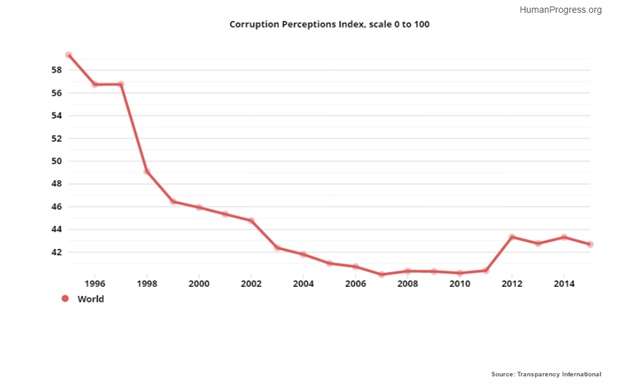 This article first appeared in Reason.

Marian L. Tupy is a senior policy analyst at the Cato Institute and editor of HumanProgress.org