Hawkish politicians speak as though we are living on the precipice of WWIII. But the data tells a less alarmist story
Exclusive
0
image
default
white
fewer-soldiers-and-fewer-war-deaths
60
Fewer Soldiers and Fewer War Deaths
By Chelsea Follett
|
@chellivia

This week, 101 years ago, a young Canadian artillery officer named John McCrae wrote the iconic war poem, In Flanders Fields. Following the death of a friend and fellow soldier in World War I, the author wrote, in part,

In Flanders fields the poppies blow
Between the crosses, row on row,
That mark our place; and in the sky
The larks, still bravely singing, fly
Scarce heard amid the guns below.

We are the Dead. Short days ago
We lived, felt dawn, saw sunset glow,
Loved and were loved, and now we lie
In Flanders fields.

Today, those words remain a poignant reminder of the tragedy of death in battle. Hawkish politicians, like New Jersey Governor Chris Christie, often speak as though we are living on the precipice of a third world war. But the data tells a less alarmist story.

While war deaths are certainly more visible than ever, with television and the Internet bringing scenes of flag-draped coffins into our living rooms, far fewer people ever see battle firsthand. After adjusting for population growth, the data shows that despite the noted exception of the World Wars, battle deaths have become rarer since 1900. 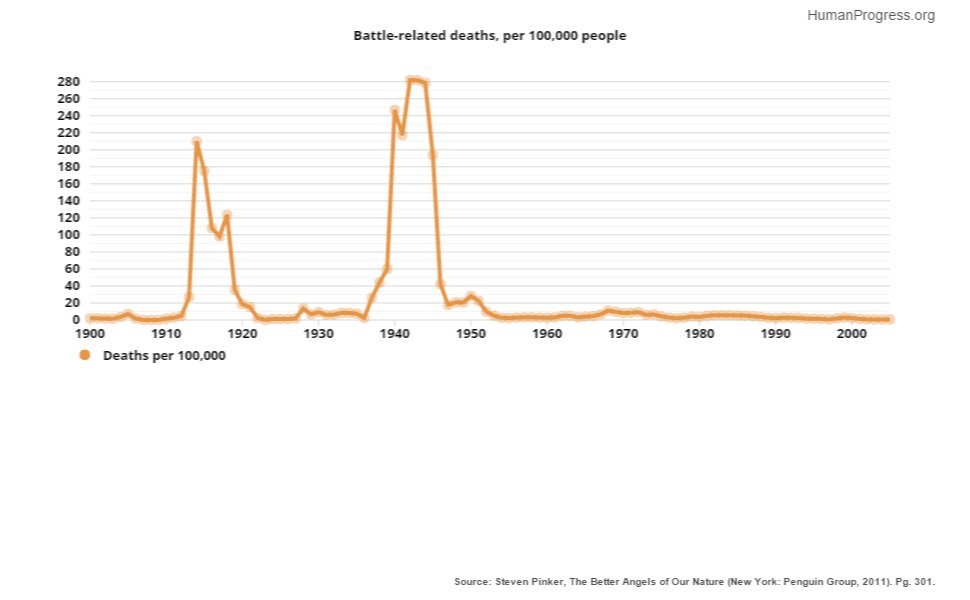 In fact, today there are fewer military personnel as a share of population than at any time since 1932. The world may seem chaotic, but the data shows a more optimistic story.