Great strides have been made since the 1960s
Exclusive
6
image
default
white
life-expectancy-up-around-the-world
60
Life Expectancy Up Around the World
By Marian L. Tupy
|
@HumanProgress

At Human Progress, we have recently updated our global life expectancy data for the period between 1960 and 2015. And it is, by and large, a happy story. First, contrast the image of the map of the world in 1960 with that in 2015. The whole world has gotten significantly darker, signifying increasing lifespans—they increased from 42 years to 68 years—across the globe.

Even the world's poorest regions have experienced significant improvements in life expectancy. South Asia, for example, comprises Afghanistan, India, Pakistan, Bangladesh, Sri Lanka, Nepal, Bhutan and Maldives, and is home to 1.8 billion people. The region saw its life expectancy skyrocket by an extraordinary 26.5 years, or 63 percent. The world average, in contrast, rose "only" by 19.12 years, or 37 percent. 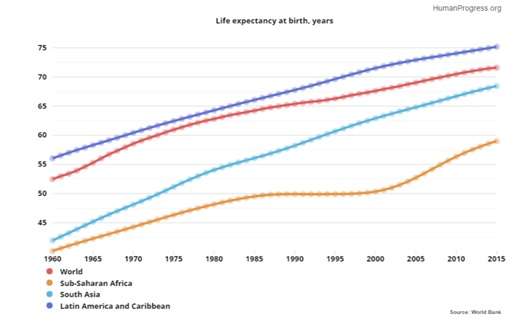 Sub-Saharan Africa, unfortunately, had suffered a serious blow in the 1990s, due to the largely unchecked spread of HIV/AIDS. Thankfully, the region appears to be on the mend, in large part because of the growing availability of cheap antiretroviral drugs. In 1960, a typical resident of sub-Saharan Africa had a life expectancy of 40.2 years. That rose to 59 years in 2015—an appreciation of 47 percent. 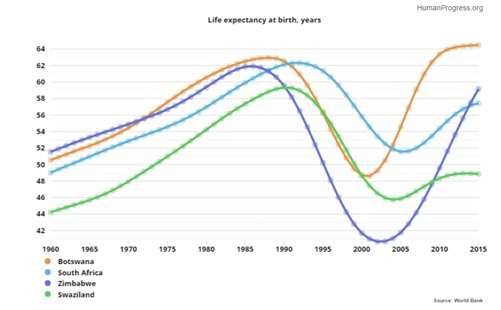 What about the United States? In recent months, we have heard much about the increase in death rates among American middle-aged whites. This is a disturbing development that bears watching, but the overall trend in the United States continues to be positive—even when compared with such star performers as the Scandinavian countries. While our life expectancy trails Scandinavia, American gains have been greater. Between 1960 and 2015, life expectancy rose by 12.71 percent, 11.32 percent and 11.02 percent in Sweden, Denmark and Norway respectively. In the United States, it rose by 13.45 percent. 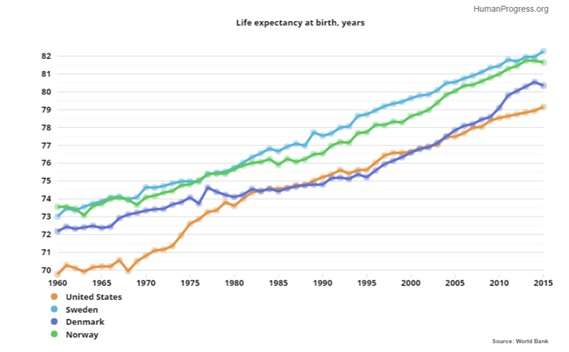 Life expectancy is one of the best indicators of the overall state of humanity, for it reflects the interplay of rising incomes, material abundance and medical breakthroughs as well as declining violence. Happily, the data shows that contrary to the dire predictions of doomsayers, like Thomas Malthus, Rachel Carson, and Paul Ehrlich, humanity continues to flourish.

This piece was first published in Reason.