In Botswana incomes rose by 285% since 1980, but in Zimbabwe they declined...
Exclusive
0
image
default
white
a-look-at-mugabes-legacy
60
Consider This Brief Look at Mugabe's Legacy
By Marian L. Tupy
|
@HumanProgress

They say that it is difficult to make predictions, especially about the future. Back in 2000, when Robert Mugabe started to expropriate commercial farms in Zimbabwe, thus consigning that country to economic ruin, I predicted that the good people of Zimbabwe would revolt rather than see their country go down the tubes. Sixteen years later, Mugabe is still in charge and Zimbabwe's economy has been, by and large, destroyed. Having learned a lesson—note to Bill Kristol—I have not made another prediction since.

On the upside, Mugabe will have to die someday. According to South Africa's Mail & Guardian, the 92-year-old has recently relinquished many of his responsibilities, works only 30 minutes a day and had his Singaporean doctors flown in to Harare for an unspecified medical procedure. Assuming that the dictator really is on his final, unlamented, leg, let us look at three highlights of his 36 years in office. (To put Mugabe's legacy in perspective, I will compare Zimbabwe with its regional neighbors: Botswana, Namibia and Zambia.)

When Mugabe took over, life expectancy in Zimbabwe was 60.5 years. It peaked in 1990 at 63 years. Then came the HIV/AIDS epidemic and life expectancy collapsed to a low of 40.7 years in 2002. While HIV/AIDS hit the entire Southern African region, the consequences of the epidemic were particularly devastating in Zimbabwe; they were exacerbated by the collapse of Zimbabwe's healthcare system that followed the economic meltdown, malnutrition and the spread of other communicable diseases, such as cholera and tuberculosis. Today, life expectancy remains lower than what it was 36 years ago. 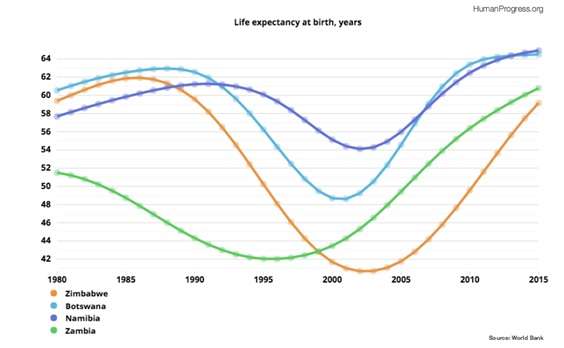 Now let us look at inflation adjusted income per capita, which was $633 in 1980. Average income rose to an all time high in the mid-1990s, but then collapsed to $458. That's a decline of 28 percent. (I have not used my favorite income data set, which adjusts not only for inflation, but also purchasing power parity, because it has no data for Botswana.) Contrast that with Botswana, where incomes rose by 285 percent. Even Zambia, which toyed with socialism in the 1970s and 1980s, is today richer than Zimbabwe. Worldwide, incomes rose by 57 percent and average income in Africa rose by 68 percent between 1980 and 2015. And, let us not forget that Mugabe's economic mismanagement resulted in the second highest hyperinflation in recorded history. According to my Cato colleague Steve Hanke, it reached 90 sextillion percent in 2008, with prices doubling every 24.7 hours. 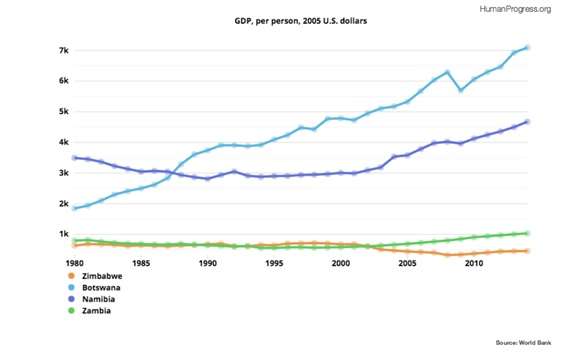 Last, but not least, consider political freedom. Back in 1980, Zimbabwe was hardly a liberal democracy, but Mugabe, a convinced Marxist, managed to make things much worse. He turned Zimbabwe into a one-party state and sent his North Korean-trained goons to wipe out 20,000 supporters of the opposition in the province of Matabeleland. Zimbabwe's "democracy score" nosedived between 1980 and 2008, when Mugabe's ZANU-PF party was forced into a power-sharing agreement with the opposition Movement for Democratic Change. 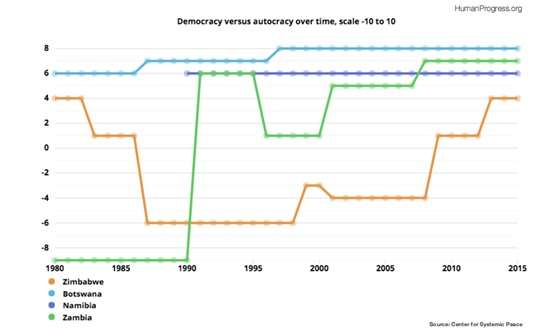 Today, Zimbabwe, once Africa's second most sophisticated economy, is a wasteland. As the aging dictator's hold on power slips away, Mugabe's successor will face the unenviable task of undoing 36 years of failure.

This first appeared in Reason.